If you’re considering getting a pug, it’s a good thing to ask if they’re affectionate or not. I see the level of affection between dogs and their human family members as being a compatibility factor. If you want a really affectionate dog, an aloof dog breed wouldn’t be a good fit. Similarly, if you prefer a really independent dog, accidentally getting a dog that wants a lot of affection could be a bad idea.

How affectionate are pugs?

Pugs are definitely on the affectionate end of the aloof or affectionate spectrum. If you want to know that your dog loves you, a pug is a pretty good choice! If you prefer an independent dog, a pug probably isn’t for you.

Are pugs affectionate with everybody?

I see pugs as a generally friendly breed, so they aren’t likely to dislike strangers or new people. They won’t necessarily want to curl up in a stranger’s lap, though. Where with the people they are close with, they’ll basically wat to be touching them 24/7!

I had one pug that was affectionate with most everyone. Frank was excited to see anybody, and would sit in a stranger’s lap if it was the only one available. He also seemed to particularly like kids. On rare occasion, he’d choose to be near a child rather than sit with me or Ryan even if we were available! While both of our pugs grew to know and remember a variety of our family member’s, frank was the one who definitely seemed more excited to get to visit with extended family sometimes. 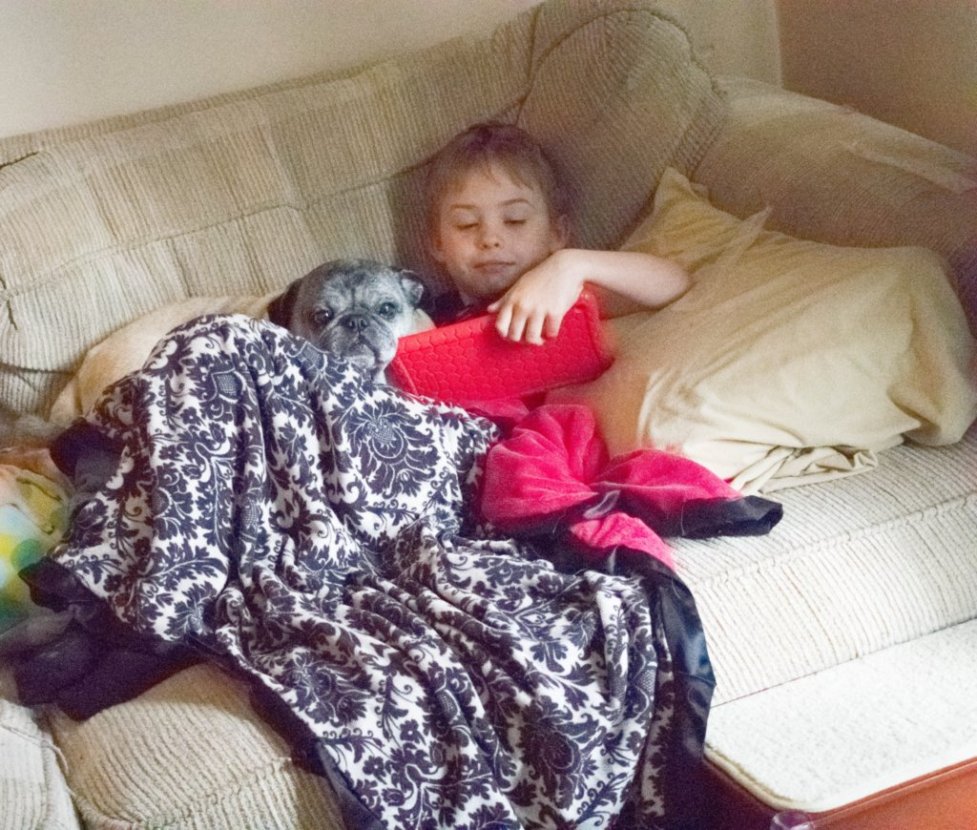 Frank cuddling with my nephew, Drew.

Beans on the other hand definitely preferred Ryan and I above everyone else…and honestly, she spent way more time with me than Ryan. She had a really nice bond with Ryan too, but I was definitely her primary perso. She didn’t mind other people stopping over at our house, or visiting with extended family, and she never barked at strangers or anything. She seemed more indifferent about most other people, though. The exception to this would be if we left her. When we’d travel we sometimes left the pugs at my mother-in-law’s house. When we left my mother-in-law’s house, Beans would become attached at the hip to my mother-in-law until we got back. It seemed like Beans needed to cling to someone. While she preferred me, if I wasn’t available she’d pick a new favorite person from those available! Haha.

Frank loved to be near people and rest his chin on them. We called his ‘chinning’. It was almost like he thought his head was too heavy so he was always looking for someone to lean it on. 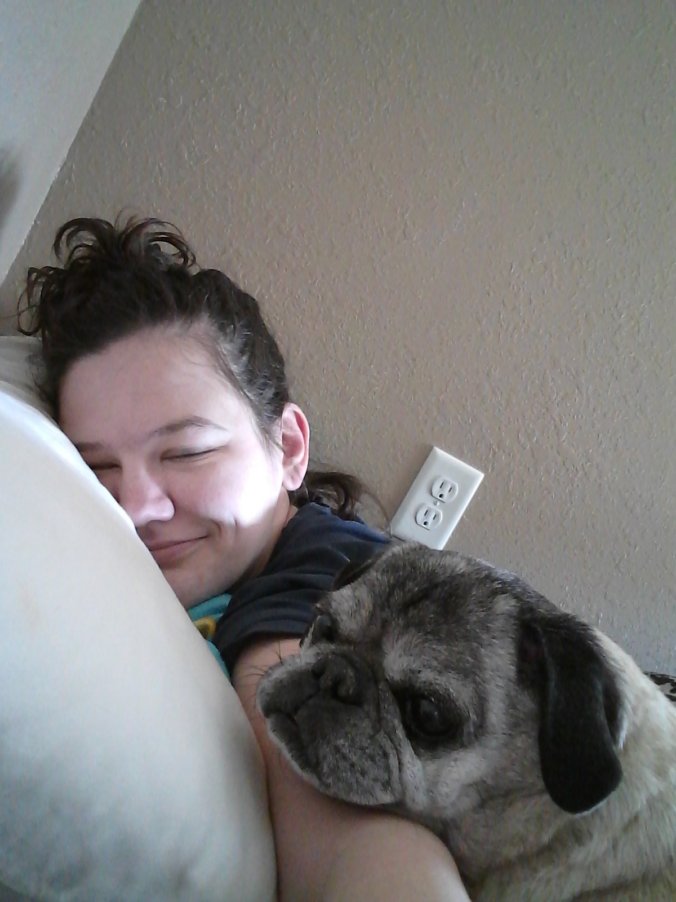 Can pugs be too affectionate?

Pugs definitely may be too affectionate for some people’s preferences. If you’re someone who finds yourself feeling smothered by pets who want to touch you a lot, you may find pugs too affectionate.

My pugs literally wanted to be touching me as much as possible. Anytime I sat down, they wanted on my lap. When I laid down, they wanted to lay right against me. When I cooked or did the dishes, they’d try to sit on my feet! While we could get our pugs to sit alone if we needed them to, they didn’t prefer to. They also didn’t like being home alone.

Related post: Can pugs be left alone all day?

Neither of our pugs ever licked other people, but they both would kiss Ryan and I. Beans liked to lick us more than Frank did. If we would have let her, I think Beans would have kissed us for hours straight. I don’t really like the sensation of being licked so I’d let her lick me a few times (in an attempt to let her know I was accepting of her affection) but then gently ask her to stop and she would. Ryan didn’t mind the kissing as much so he’d let her lick him longer than I would, and she seemed to really enjoy that he let her. Of course, being licked and may other aspects of animal affection can come down to personal preference. 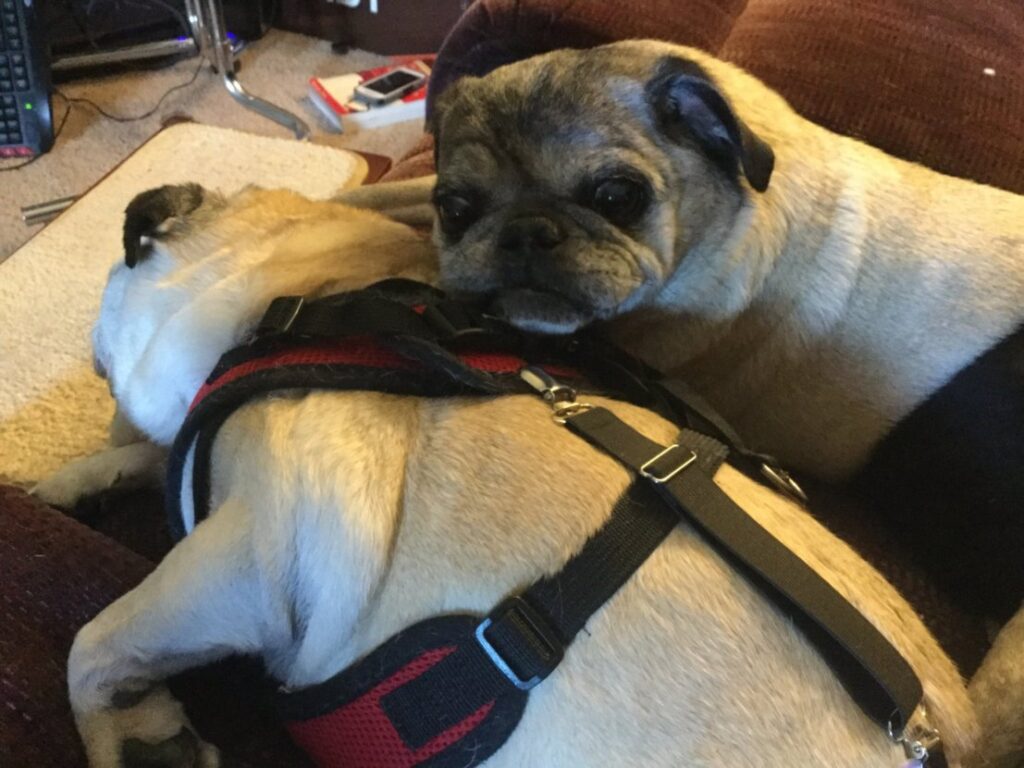 Are pugs affectionate with other animals?

My pugs were listed as a bonded pair, as they had always been together. They seemed to be more focused on us people than they were on each other most of the time. However, they definitely did like each other. They would play together, and if people weren’t around, they’d usually lay together. We had some small dog bed intended to fit just one of them, and some big dog beds intended to fi them both. Even if one of them laid down in a smaller bed, the other would often smush themselves into the small bed with the other! Frank often liked to lay his head on Beans and she didn’t seem to mind at all.

Stanley Coren wrote an article about how dogs dislike being hugged, and it actually raises their stress levels. I remember went his first came out, it went a bit viral because so many people were sad to hear this, or wanted to believe it wasn’t true.

I’m no animal therapy expert, so I tend to defer to the experts. Also in my personal experience, it doesn’t seem like my pugs particularly liked being hugged. They did tolerate it, though. Despite not necessarily liking to be hugged, they did love to cuddle. Frank disliked cuddling if you put your arm over him, though. So perhaps it would be more accurate to say they loved laying up against us!

I don’t know if dogs in general are supposed to like kisses. From what I can tell from my experience with my pugs, neither of them liked being kissed face-on. In general, I don’t think dogs like having someone right in their face.

However, our pug Frank very clearly loved being kissed on top of his head! He had this little noise he’d make…sort of like a hum, whenever he was really happy. We called it his ‘purr’. He’d make it sometimes while being pet, but he’d almost always do it if you gently rubbed his ears or if you kissed his head or the sides of his face. When being kissed, he’d also close or squint his eyes in a happy way, similar to the face some cats make when they are really enjoying being pet. 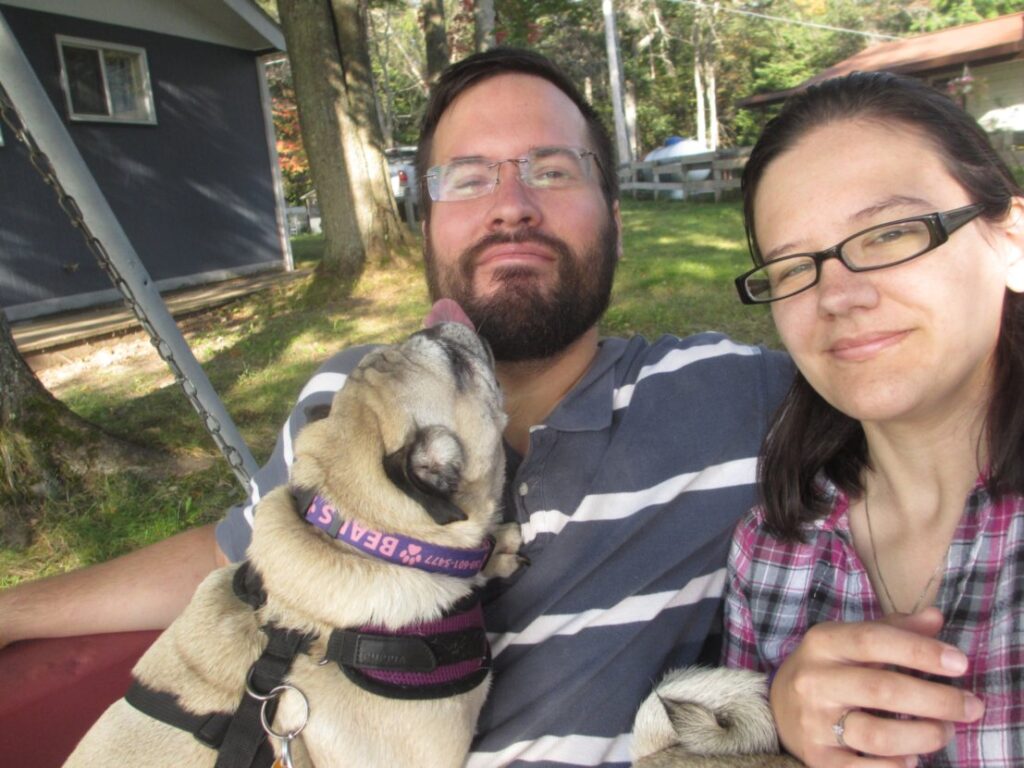