I am Emily, a 30 year old from Michigan. I live in a small, fairly rural town with my long-term partner, Ryan. I’ve been blogging since 2009. My other blogs are Emily Reviews, Frank Loves Beans (now inactive), and Wavy Hair Care.

Around 2012 or so, Ryan watched a YouTuber who had a pet pug. Although I didn’t really watch the channel myself, I occasionally caught glimpses of the videos and of the pug. He was just cute and funny, and really caught my eye. I found myself daydreaming about someday getting a pug.

Then in the summer of 2013, I was on Facebook and saw that someone in our tiny town had listed her two pugs as needing a new home. They were 8 and 9, and they had silly names. Frank and Beans. 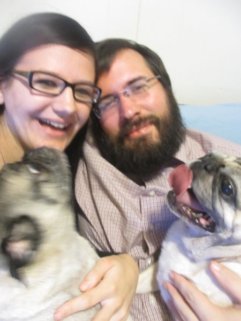 We had never considered getting an adult dog, and certainly had no plans of getting senior dogs. We also had no expectations of getting two dogs at once! Yet..we just felt drawn to them.

We are usually cautious, calculated people who plan big decisions. We aren’t spontaneous. I knew all the basics about pugs, after a few years of reading and watching content about them. Still, it felt a little crazy to consider getting two senior pugs on short notice. It’s not the type of thing we’d usually do. Ryan was more hesitant than I was. He said we’d take them for a week, and see how it went. I agreed.

The third day we had them, we hadn’t really discussed our feelings about how it was going yet in much detail. Yet, I found myself feeling almost panicky when I realized that I absolutely needed to keep these pugs. I knew I would be absolutely heartbroken at the end of the week if Ryan wasn’t planning to keep them.

Thankfully, when we talked about it, we had both fallen equally in love. Neither of us would have ever considered letting them go back. It’s wild how much your feelings can grow in just 3 days!

From there, we became pug-obsessed people. Frank and Beans meant the world to us, and were the center of our lives for over 7 years.

Frank was incredibly emotionally intelligent and loved to cuddle. He was really social, always happy to greet anyone who came to the door. He was easily intimidated by other animals including cats and dogs of all sizes (including ones much smaller than he was!). He favored Ryan over me but loved us both. While the pugs both clearly loved each other, it was very obvious that Frank loved Beans. He hated getting his own nails trimmed, and would cry when Beans was getting hers done!

Beans was attached to me at the hip. She loved Ryan, but she definitely favored me. She was an anxious dog who loved routine. She got so excited each morning when we’d get up, and was equally excited each night when we went to bed. She sat on my feet while I did the dishes. She liked to try to chase wild animals. While both pugs loved food, Beans was particularly crazy for chicken. 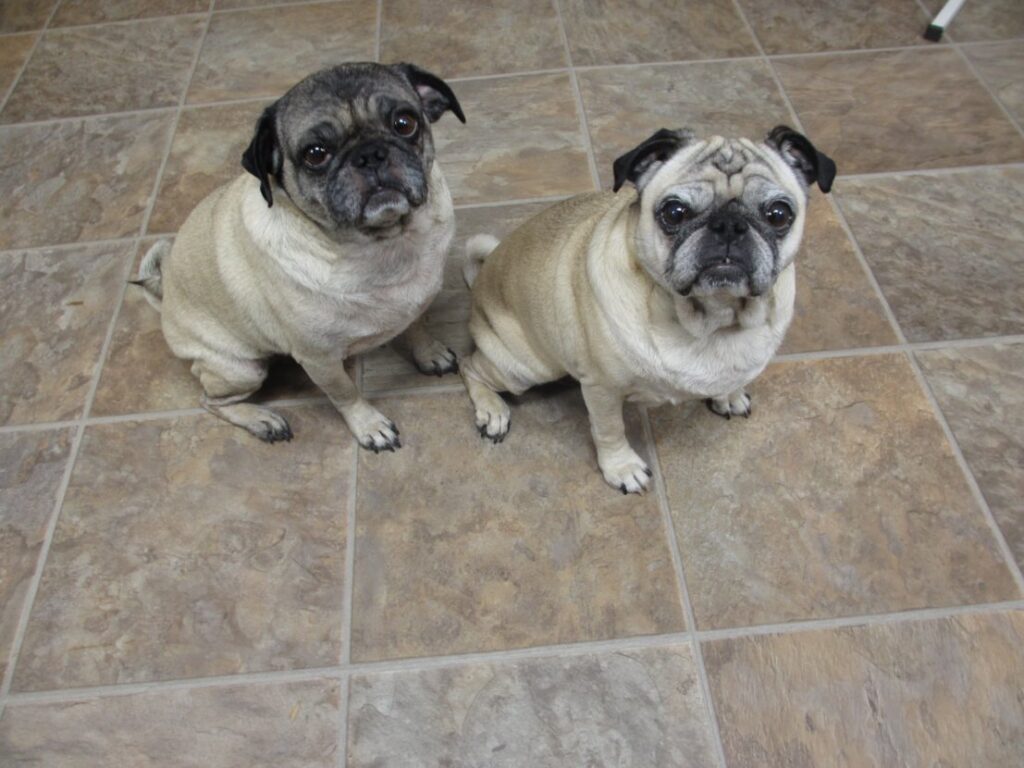 Frank on the left, Beans on the right.

People often asked us how we told them apart, as they were both fawn pugs. Frank was taller and bigger in general. Frank had more black on his face, the area between his ears had a good bit of black in it, while Beans’ “forehead” was tan. Beans had a smaller head all around. Frank had a longer nose, and breathed silently. Beans had a shorter nose and flatter face and panted more easily. Frank walked in a “fancy” way, sort of like a trot. Beans always had a slightly odd gait – not limping, exactly, but definitely less ‘smooth’ feeling than Frank’s was.

This blog is largely a tribute to them. It’s a way to teach others about this breed that I love so much. It’s also an excuse to show others their photos and videos.

I’ve learned about pugs through several years of reading forums and websites, as well as watching youtube videos. I’ve also read The Pug Handbook by Brenda Belmonte, so some of what I’ve learned should be credited to that book.