Pugs were bred to be lapdogs. As a result, most of them are relatively low energy dogs. As I mentioned in my pug activity level blog post, most pugs are good with a couple of quick walks per day. Generally speaking, if you’re looking for a running buddy, I wouldn’t recommend a pug to you. My two pugs were couch potatoes, as most pugs are. Pugs tend to be sensitive to the heat, and aren’t the best breathers. Do athletic pugs exist, though? Can pugs be athletic? That’s what I’m jumping into in this post!

Can pugs be athletic?

Yes! Most pugs aren’t big fans of exercise, but some dogs do enjoy hiking, agility, swimming and other physical activities! Pugs #1 trait is that they love their people. If they are owned by someone who likes to be active themselves, odds are higher that the pug will join in with being active, too.

I wanted to give you guys some real life examples. I found RetroPug_Frankie on Instagram who has a lot of pictures and videos of this pug exploring outside and being active in a variety of different ways.

Another fun Instagram account featuring an active pug is Peanut_AdventurePug. Just like the username sounds, this is an Instagram showing a pug going on adventures! They hike, camp and travel around the pacific northwest which is such a gorgeous part of the country.

Pugs tend to be “front heavy” because their shoulders are more broad than their hips. This makes it impossible for most pugs to swim without a life jacket. However, some pugs can swim independently! Here is a pug swimming on his own.

Even if your pug can’t swim independently, some pugs really enjoy swimming if given the right help (like a properly fitting dog life jacket).

Can pugs do agility?

Yes, pugs can do agility! Some quite enjoy it. If you’d like to see an example, dg.agility on Instagram is a pug that has a variety of agility content that is quite fun to watch.

How athletic can your pug be?

Exercise tolerance definitely varies among pugs. If you’d like your pug to become more athletic, you can slowly but surely increase their activity level to work to build their stamina. There is no strict amount of exercise that is a limit for all pugs. It also will vary depending on the weather. More activity can be tolerated in cooler weather with less humidity. Instead of focusing on a set amount of time, you’ll want to watch your pug’s body language to know when they have had enough. You don’t want to exercise them past the point of breathing too harshly, or getting overheated. Of course, anytime that your pug is active you want to make sure they have access to fresh water.

Do you have an athletic pug? If so, leave a comment about what types of activities your pug enjoys!

Pugs are a pretty controversial-looking dog, apparently. Most people either find them super ugly, or super cute. There isn’t much in between, it seems!

My aunt had a pug when I was little, and I’ll confess, I thought of her pug as ugly back then. I believe it was largely a result of how pugs don’t look like most other dogs. Though even as a young adult, I saw pugs as ugly, it was in an oddly cute way. The phrase “they’re so ugly they’re cute” applied to my views in my early 20’s.

My boyfriend followed a youtuber who had a pug and we often laughed at the sounds and expressions that the pug made in the background of youtube videos. That’s when I first started thinking I wanted to get a pug, someday. So although I saw the pug as somewhat ugly, I definitely thought he was more cute than ugly by then.

Of course, after getting pugs of my own I fell in love with them and started to see them as super cute…for the most part. I still think the expressions pugs make can make a difference in how cute they seem! 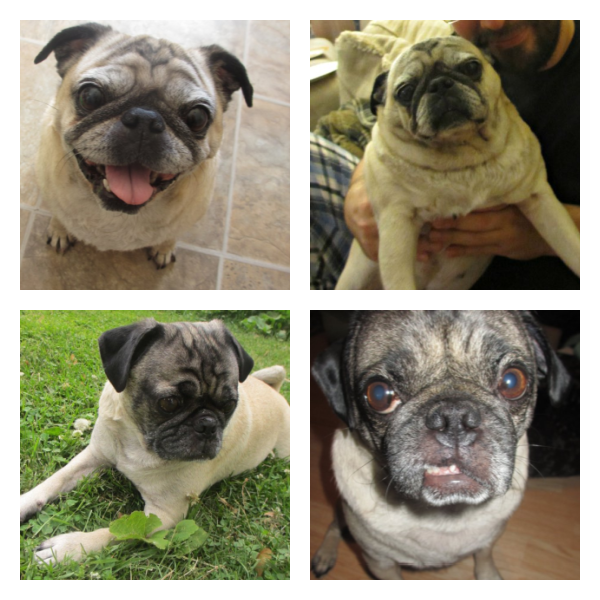 Due to them having excess skin, I think the way they are sitting/laying and the angle of the photo can impact how overweight they look, too. Anytime we took a picture of one of our pugs being held, they looked pretty rough. I think the main reason for this is because when we hold them, it smushes their skin and causes their extra skin to bunch up in weird areas making them look extra chubby and extra wrinkly!  I also think the position of their ears seems to make a big impact on how cute they look in pictures. When they pull their ears back they almost look scared which makes them look less cute.

Reasons why pugs are ugly

They look a lot different from most other pug breeds. It’s a common instinct for humans to see things that are different or less common as ‘worse’.

Their skulls are shaped a lot different, causing their faces to be “flat” which some find off-putting.

They are “bug-eyed”. Their big, bulging eyes are seen as ugly by some.

Their tails are upturned, so you can always see their butts! To me, it’s funny that people are that bothered by it, but I have heard people seriously say that their reason for disliking pugs is because you can see their buttholes!

They are a short, yet stocky breed. Many pugs are overweight, but even healthy-weight pugs are stockier looking than most dogs of a similar height. They are meant to be “a lot of dog in a small package”. This causes some people to see them as unattractive.

They have a lot of wrinkles, which some dislike. 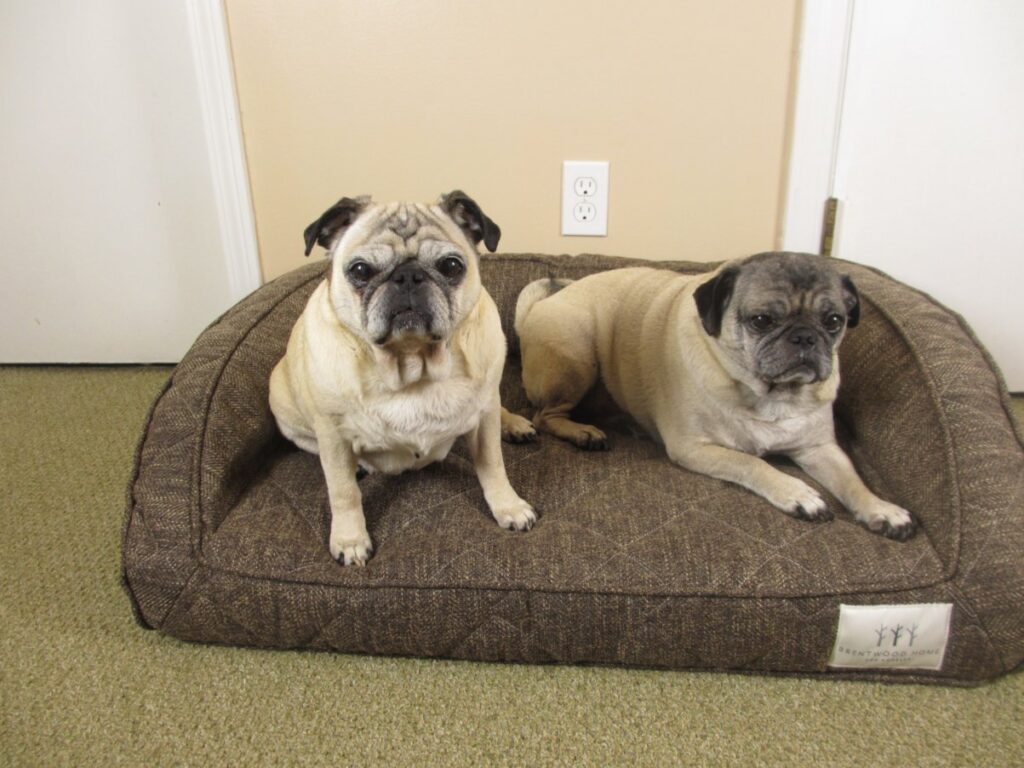 As Beans (on the left in this picture) got older, the sides of her muzzle went gray while the center stayed white. I think this made her look even more like she was ‘frowning’.

Their excess wrinkles or excess skin around their mouths often make them appear to “frown” while having a resting expression.

They often have an underbite which can cause their lower teeth to show. Some people see this as ugly.

Reasons why pugs are cute 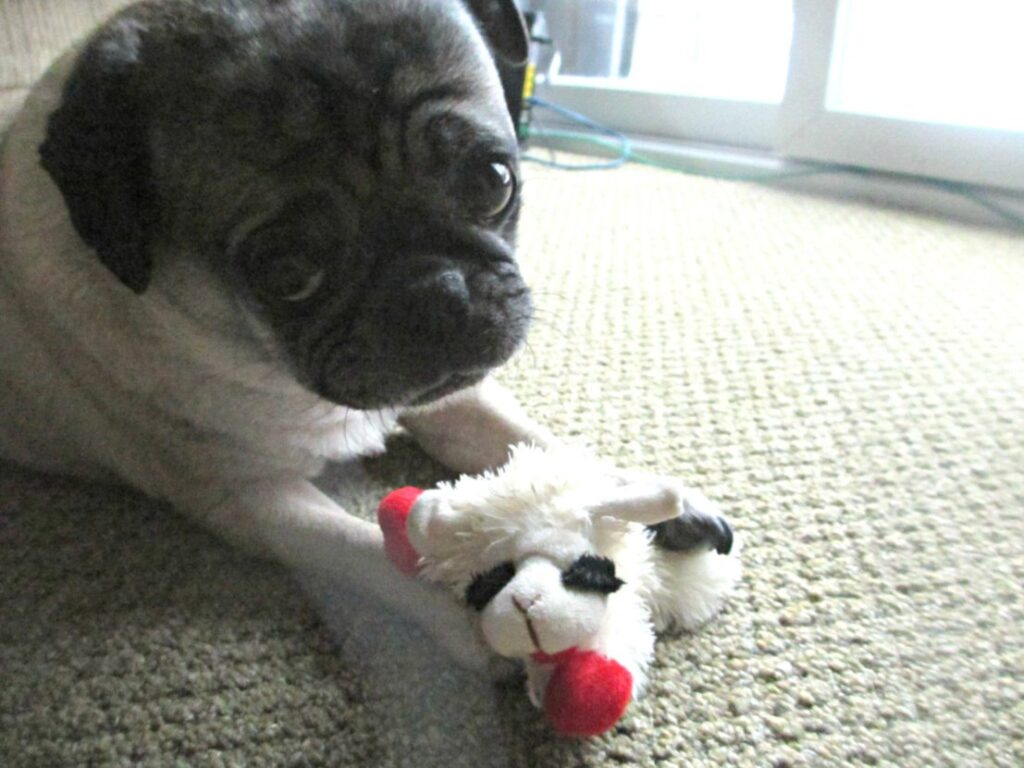 They have big eyes. The phrase “puppy dog eyes” references big, emotion-inducing eyes. For me, one of the biggest ways that pugs show their cuteness is through expressions that show in their eyes!

They are very expressive dogs. When you can visibly see that your dog is excited, happy or content, that just strikes me as so cute!

They have rolled up tails that look like cinnamon rolls. 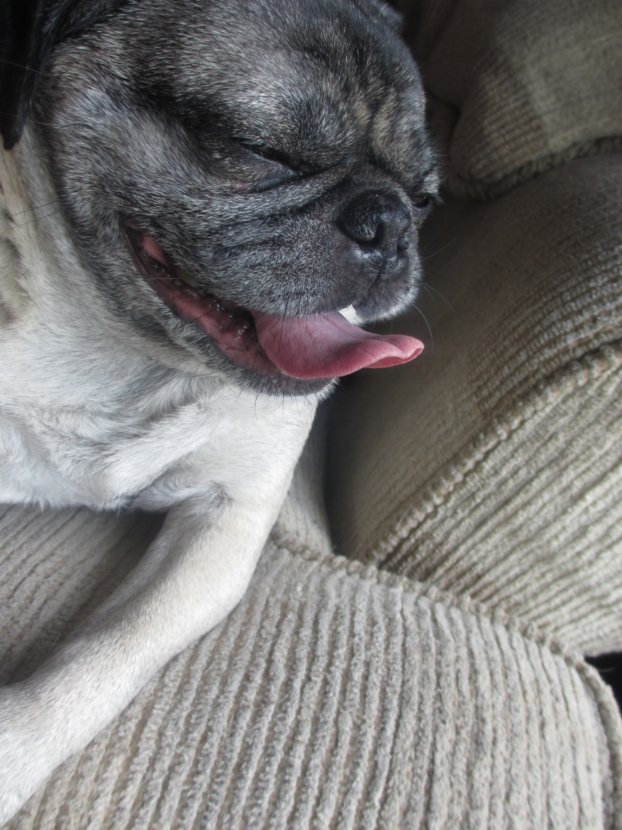 They seem to “smile” when they’re excited or hot.

They perk their ears up when they’re listening intently.

They do the “head turn” if they are confused or excited about something you said.

We lucked out and managed to have our two pugs for over 7 years without either of them requiring a cone of shame. However, sometimes they are needed. You probably know that pugs shouldn’t wear collars, so you may be wondering how to handle a cone of shame with a pug.

Can Pugs Wear A Cone Of Shame?

Pugs can wear a cone of shame. It shouldn’t be too tight around their neck, as they are at increased risk of collapsing trachea. You may find that alternative cone styles work better for your pug.

The reason why pugs shouldn’t wear collars is because they shouldn’t have pressure on their necks. In other words, it’s not really wearing a collar that is a problem, it’s having a leash connected to a collar, that is the problem. As long as you won’t be pulling your pug by the cone (as I’m sure you won’t!) it should be fine for them to wear.

Something to consider though, is pugs have a large neck compared to their overall body size. They will likely need a fairly large cone, and in a traditional cone that will mean it will stick out pretty far from their head. This may frustrate them or make it challenging for them to walk around. Also, traditional cones don’t leave dogs with the ability to access their food or water bowls easily. So if you go with a traditional cone, make sure to assist your dog with getting water regularly.

Vets often provide patients with a plastic cone after surgery, so the upside is that they may be free (or at least included in what you’re already spending at the vet). However, many dogs are afraid of traditional-style cones. They don’t understand what is going on when they see the edges of the cone in their field of vision and it often frightens them. 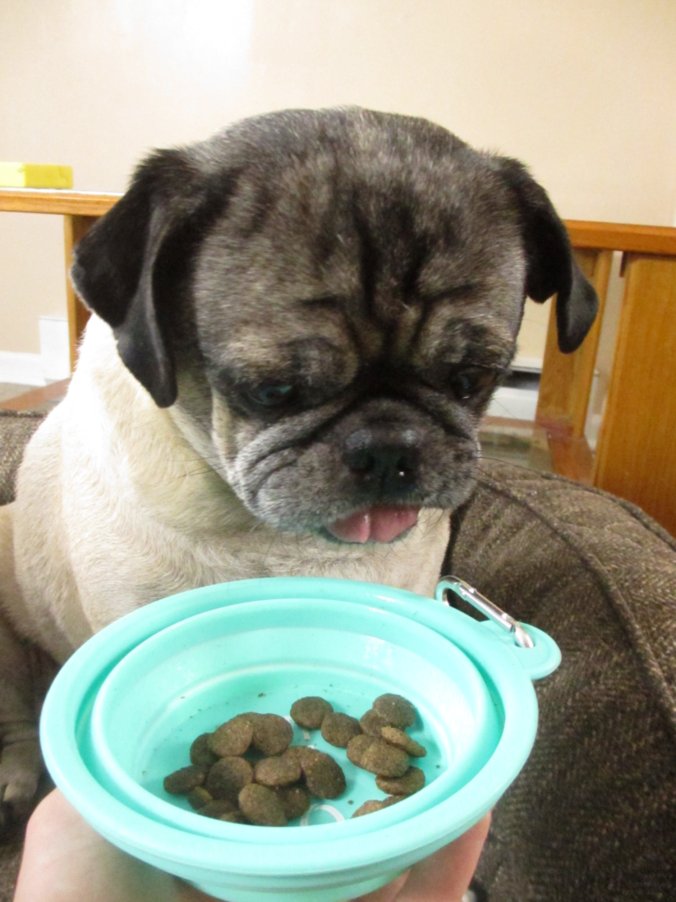 Do Pugs Need A Cone Of Shame?

Something to consider is your pug’s flexibility. Many pugs are not as limber as other dogs, due to being short and compact breeds. For example, if you are getting your pug neutered but they cannot curl around to reach between their legs, they may not need a cone.

The Best Style Of Cone For Pugs

The best style of cone for pugs is cone collars, in my opinion. These look similar to neck pillows that people wear on airplanes. They do not stick out far from the face like traditional cones, so dogs can use their food and water disheswhile wearing collar style cones. Because they don’t stickout far from their face, they won’t be at risk of running into the walls or furniture with the edges of the cone, either.

The collar style cones are thick enough that they reduce how much movement your pug can make with their head. They won’t be able to turn their head around to look at their backend, for example. This keeps them from being able to see or reach parts of their body that are injured or healing from surgery.

Also, because the collar style cones don’t stick out very far, it’s a lot harder for dogs to get them off. They can’t drag their head along the side of furniture to try to knock the cone off their head.

If they are still nervous or uncomfortable even with the collar style of cone, you can give them a kong or bully stick to try to help distract them. Yet another bonus of this style of cone! 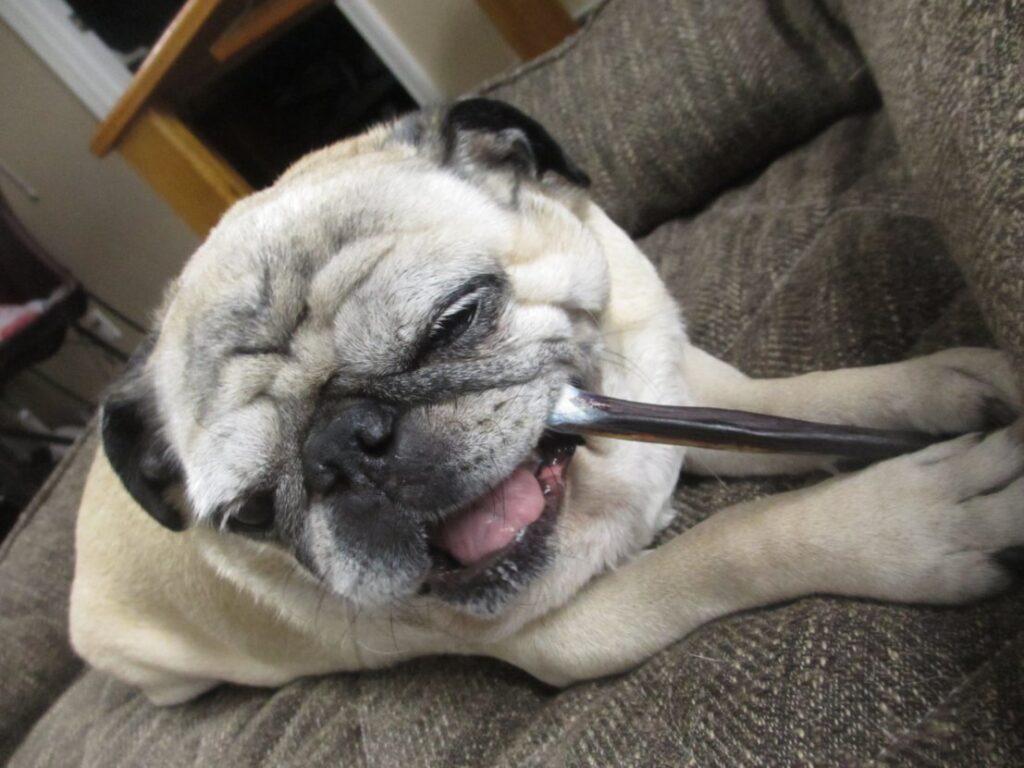 Cone of Shame Size For Pugs

Pugs are a toy breed, though they are the largest breed that is considered a toy breed, so I tend to think of them as small breed instead. Anyway, when looking at cones of shame you may assume that a pug should fit in a size small sees how they are small dogs.

Cones are sized based on neck circumference though, and most adult pugs have large necks compared to the rest of their size. My pugs had 14 and 16 inch necks. This is quite large, many “large” size dogs (such as labs) have a neck around that size!

When looking at different collar style cones on Amazon, most of them listed those 14 and 16-inch neck sizes as a “large”.

If you aren’t certain of your pug’s neck size and they are full-grown, I’d recommend ordering the E-KOMG collar in size large as it fits dogs with 12-18 inch necks and most all adult pugs would be within that range. It’s affordable at under $15 and has lots of great reviews.