Most of this article will focus on a variety of different strange behaviors your pug may be having, and will suggest causes to why they may be acting that way. 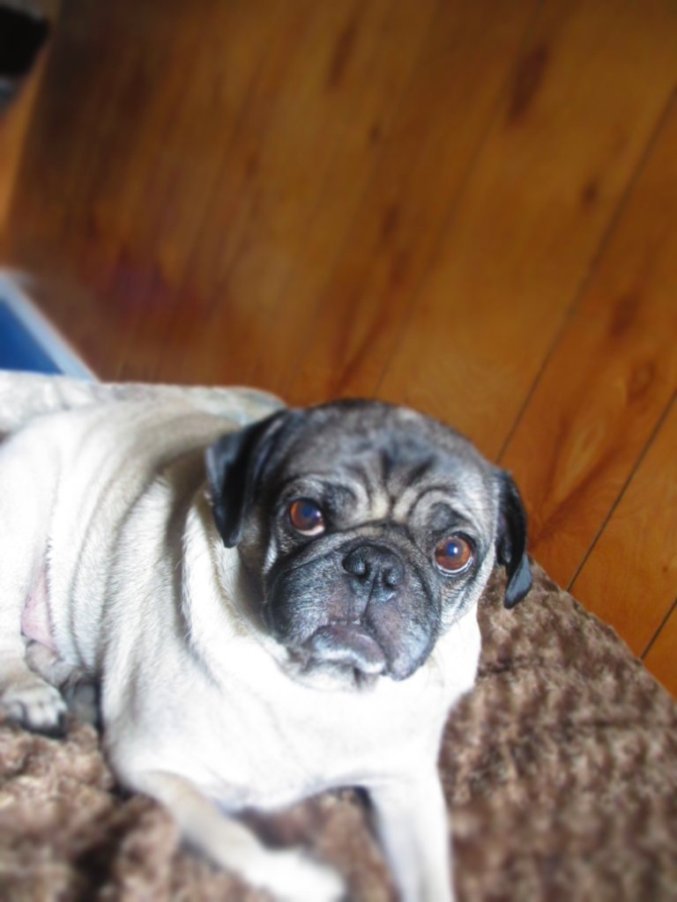 First though, I thought I’d address the possibility that you know your pug is acting strange, but you can’t quite pinpoint what is off. If that’s the case, I’d recommend that you ask yourself these questions:

These are some of the more common symptoms that may make you think something could be ‘off’ with your pug. If those don’t seem to help you find out what is strange about your pug’s recent behavior, you may find that just browsing the subheadings in this article will help you to recognize what is off about your pug.

If your pug is acting lethargic, it’s likely that they aren’t feeling well. They could be feeling nauseous or they could be experiencing pain. Or, they may simply have less energy than usual as a result of their body using energy to fight a infection.

There are a variety of different specific causes, but lethargy is often tied to illness or injury, so a trip to the vet makes sense.

If your pug is acting disoriented, this is a major cause of concern. They may be experiencing some sort of neurological issue. Definitely head to the vet!

The exception to this would be if you know your pug has a “safe” reason why they may be acting disoriented. For example, my pug Frank acted disoriented after we picked him up from surgery. We knew he had been given medication to go to sleep, and that it would slowly wear off throughout the day. So in a case like that, lethargy can be expected and not a cause for concern. Without a very specific, known cause that is ‘safe’, though? Head to the vet as soon as possible.

If you pug is acting ‘drunk’ this is a big cause for concern and you should head to the vet as soon as possible.

If you think your pug seems confused, ask yourself if they seem to be acting more silly, or more disoriented. If you’d describe their confusion as disoriented, see the section for that above. It’s a big reason to be concerned.

If they are seriously confused, they may be experiencing some sort of neurological problems. For example, my pug Beans would act confused after having a seizure. While the confusion after a seizure is not a problem itself, seizures are a problem, of course. So if you see significant confusion but aren’t sure of the cause, I’d want to investigate that cause to make sure it’s not of neurological cause.

However, some people may describe their pug as ‘confused’ if they’re being a bit playful or goofy. For example, if you say certain words and your pug tilts their head? That could be described as ‘confused’ but it’s not a reason to be concerned. 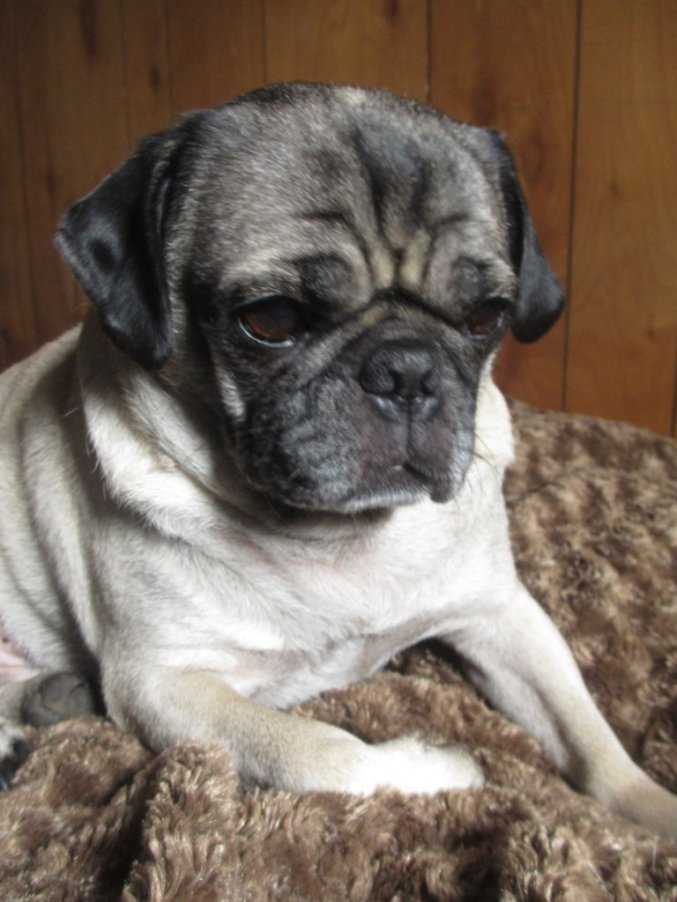 If your pug seems sad, it’s possible that they are, in fact, feeling sad. Pugs are typically very social and affectionate dogs. If you aren’t sure why your dog seems sad, I’d wonder if they’ve had enough time with you (or their other favorite people) recently. If not, try to give them extra love and laptime.

My pugs would both get sad if we spent more time than usual out of the house. They liked us being home with them as much as possible! Our pugs also would seem a bit sad after we moved with them to a new home. I don’t think they necessarily missed our old house, exactly, but it takes time for them to adjust to the new locations as they are creatures of habit.

It’s also common for dogs to feel sad after losing another household pet. They may grieve for the pet that they used to share space with.

Pugs may also seem sad after other big life changes, such as adding a new person to the household. In this case, you’ll just want to encourage a bond between the new family member and the dog. I have a whole post on pug bonding if you want to learn more on this topic.

If your pug acts like they may feel sick, it’s time to head to the vet.

Pug Is Acting Out

If your pug is ‘acting out’ you’ll want to try to determine the motivation behind their behavior. Sometimes with puppies we may say they are ‘acting out’ when in reality they aren’t attempting to be naughty, they are just being puppies. For example, puppies naturally need to chew on things. If your pug puppy is chewing on your shoes, you may initially think of that as ‘acting out’. However, if your puppy is just trying to soothe their gums, that isn’t really acting out, it’s just being a puppy. Trying to get them to chew on appropriate items (toys, bully sticks, etc) and keeping them away from items that they are often tempted to chew on, would be the primary solution there.

If your dog ‘acts out’ when home alone, this is likely due to separation anxiety, as pugs are very prone to that. Kenneling them while you leave, or finding ways to give them more of your time/attention may help. I have a blog post about how long can pugs be left home alone? which you may find helpful.

If your pug is acting “crazy” in a hyper way, they probably need more exercise or play! While pugs are a low activity level breed for the most part, that doesn’t mean they don’t require exercise.

Sometimes in the winter my pugs Frank and Beans would get “acting crazy” and we’d realize we hadn’t given them quite enough time outside. Sometimes when it’s really cold out, it’s easy to want to rush their outside time, but that would cause them to end up with pent up energy. It’s sort of like “cabin fever” that humans can get if shut inside for too long. If pugs aren’t given enough exercise, they can get a bit ‘stir crazy’, too. This is also why many dogs will ‘go crazy’ after they are unkenneled when their people get home. They just have a lot of energy from being left in such a small space. 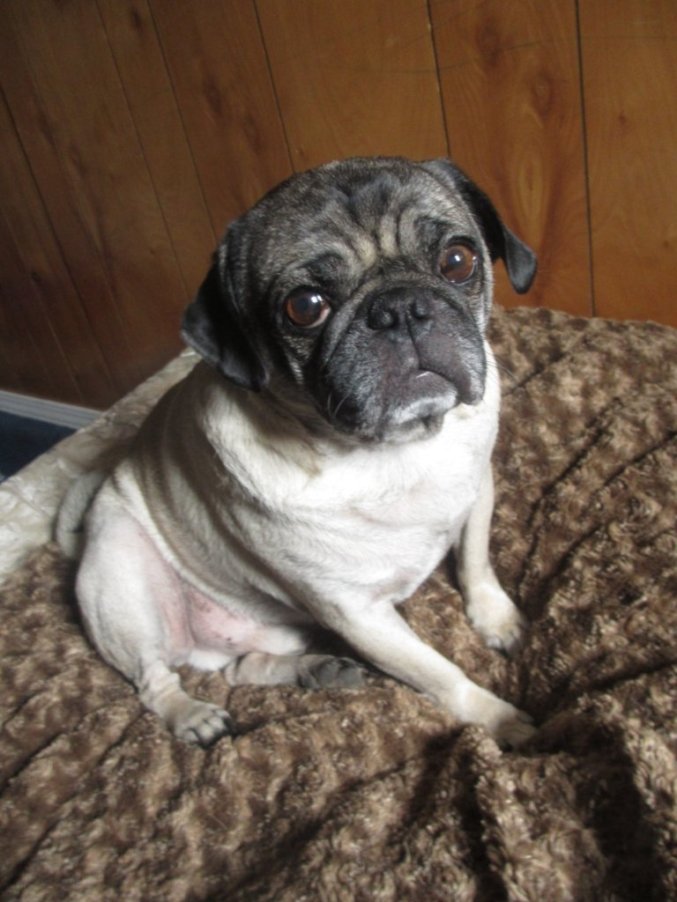 Pug Is Being Erratic

If your little pugtato is not being a couch potato andis instead being erratic, I’d recommend some play time or exercise. Erratic behavior is probably just an excess o energy or excitement. Going for a walk, or even just having some hard play time inside may help your pug find their calm again.

We all know that dogs can look guilty. With their big eyes, pugs can look extra guilty. If you aren’t sure why your pug is acting guilty, first check your home over well. I’d be on the lookout for any signs of potty accidents, or anything that has been eaten or chewed.

If your pug is acting guilty but you are pretty sure they didn’t do anything ‘naughty’, ask yourself if it’s possible that they are worried, sad or hurt and you’re reading it as guilt?

If your pug is still young, and they’re acting hungry despite eating as much as usual, look up their age to see if they may have had a change in their dietary needs recently. Or, if you’ve recently changed dog food brands, double-check that they’re getting the right amount of calories for that new food. Dog foods can vary quite a bit, so if 1/2 a cup of food per meal was appropriate with your old food, that doesn’t mean that will be the right amount if you change food brands.

Like humans, it sometimes can help to offer them water instead of food. Sometimes thirst gets confused as hunger.

If they act hungry all the time, I’d recommend my other blog post, why is my pug always hungry?

If your pug is sluggish, this may be normal or abnormal. Pugs are generally low activity dogs. However, if you see that they are more sluggish than usual, I’d recommend seeing my ‘pug is acting lethargic’ response from higher up in this post. 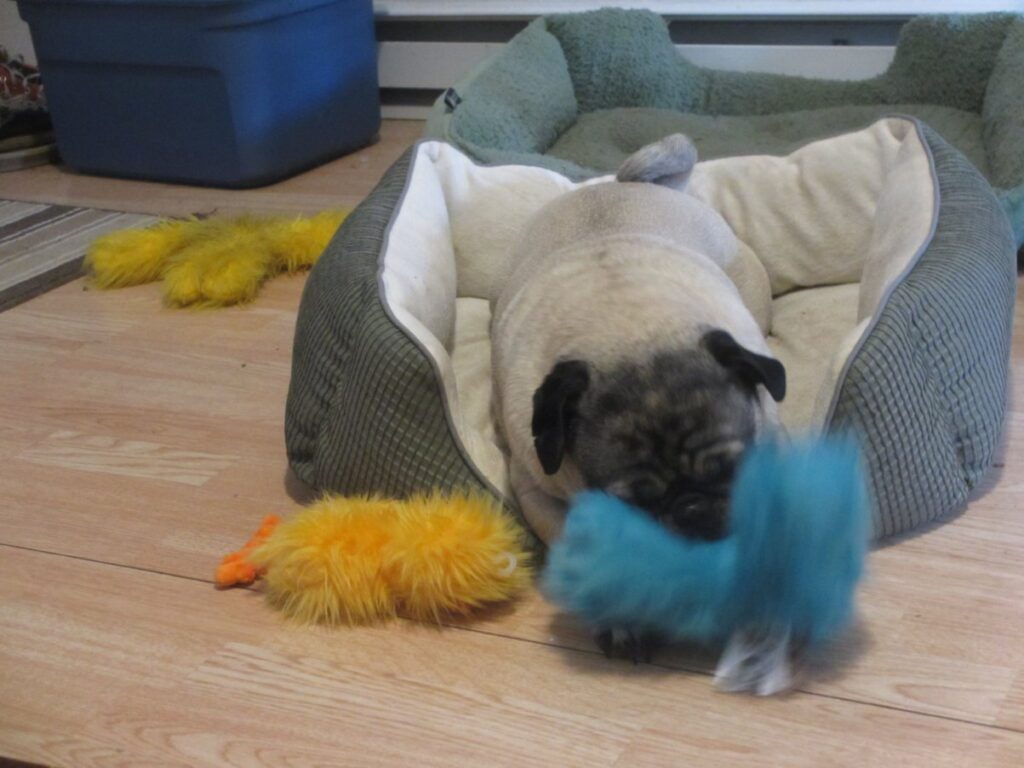 Of course, it’s natural for pugs to act tired when they are sleepy. If your pug is acting tired more than they used to, they may not be feeling well and it’s best to talk to your vet.

Pug Is Sleeping too much

If your pug is sleeping too much, make an appointment to see your vet. Excessive sleeping can be a sign of many things and your vet can help determine the cause. Some causes may be quite serious, so it’s important to be seen.

Some pugs are sensitive creatures. If your pug seems scared, try to determine the cause. From there, see if the source of their anxiety is something you can just avoid, or if it’s something they need to adapt to. If they need to adapt to what scares them, try going slowly and giving them lots of support as they experience anxiety. For example, if they are afraid of thunder, holding them while it thunders may help. If serious enough, you can see your vet about your pugs anxiety to try to learn about your medication treatment options.

Pug is not relaxing at night

If your dog is anxious or pacing at night rather than settling down, this could be anxiety, cognitive decline or other issues. I have an entire article about pugs acting strange at night, that addresses issues like pugs not sleeping at night and pugs not being able to relax at night.

Pug Is Having Accidents In The House

If your pug is suddenly going pee or poop in the house and had previously bee fully potty trained, this could be a medical problem. Even if your pug isn’t a senior yet, they could have “accidents” due to illness or internal injury. For example, it’s somewhat common for pugs to have spinal discs slip out of place. Depending on which disc slips, this can sometimes cause them to struggle to control their bladder or bowels. Urinary tract infections can cause urinary accidents, among other possibilities. Best to have them seen by your vet to make sure.