Pugs can be somewhat protective. Pugs really live to love their owners. While they are primarily lap dogs, they are very loyal and committed to their people. If they feel that their owner is in danger, they are likely to act protective. That might mean barking at someone who they think is trying to hurt their person, or even biting if they feel it’s necessary.

Can Pugs Be Guard Dogs?

Guards dogs not only warn of danger, but also defend people or property by attacking when needed. Pugs are not good guard dogs. 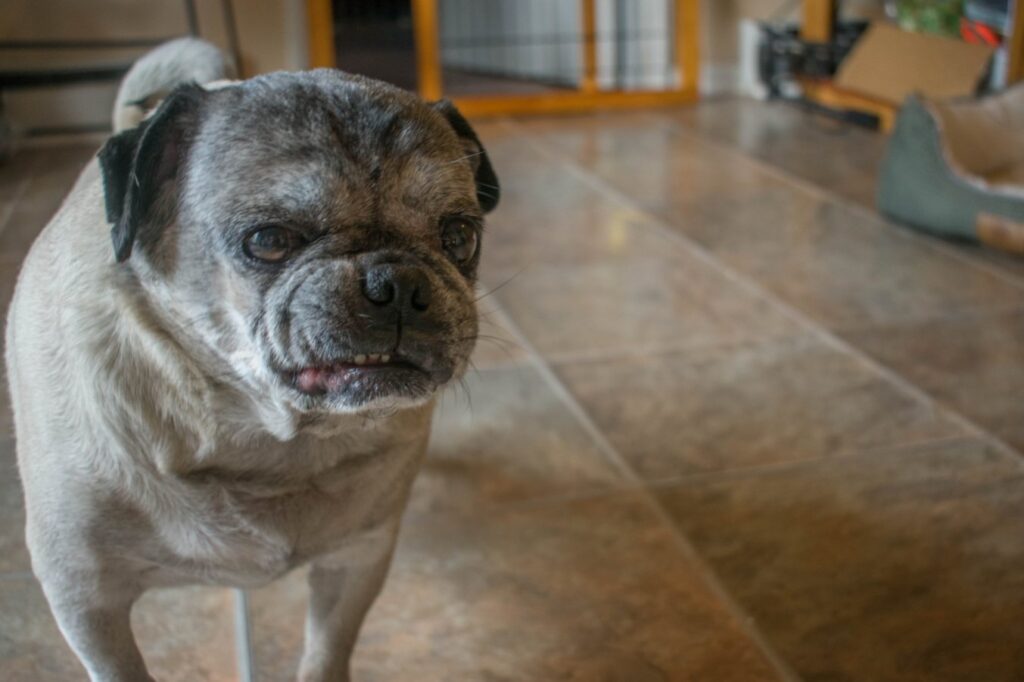 Frank would make this wrinkled-nose face whe we were playing with him. It was sort of his response to knowing we were going to “get” him. I always thought it was funny how it was clearly playful if you saw it in person – but in a picture it looks like a growl!

Guard dogs need to be able to attack if warranted. Pugs have exceptionally small mouths because of their flat faces. Most pugs can’t even get a regular-sized tennis ball in their mouth. A pug would struggle to get their mouth around the average adult person’s arm or ankle, because their mouths are just pretty small. If they could get their mouth around your arm or leg, they would have their mouth really wide open which wouldn’t give them much leverage to bite down hard.

They’re small, and easy for people to defend themselves against. I hate to say it, but if pug were attacking a “bad guy” who was willing to harm the pug, they could easily “win” the fight.

Pugs don’t have a lot of stamina, so most pugs couldn’t chase a “bad guy” very far.

Many pugs are very social. Some are so social that they’ll excitedly run-up to the mailman to say hello rather than barking.

My two pugs would only bark when people visited or pulled in our driveway if the person surprised them. If they were sleeping and suddenly heard a loud knock a the door, they’d bark. If they were awake and someone pulled in the driveway, they wouldn’t bark and may or may not even get up to go investigate!

Can Pugs Be Watch Dogs?

Watch dogs just alert people to danger, they don’t have to defend or attack. With that in mind, some pugs can be guard dogs.

Pugs have a deeper bark than you might expect for such a small dog. They don’t have a yappy sound. If someone were to try to break into your house and heard your pug barking but couldn’t see them, they probably won’t mistake them for a really big dog, but they might think they were more of a mid-sized dog…which may be enough to make them hesitate.

Some pugs are really observant and will bark to alert owners if anyone shows up. There’s even a famous story about a pug watch dog! The Spanish attempted to assassinate the first prince William of Orange. William’s pug named Pompey saved him by barking at the attempted assassins. The pug was named the official dog of house orange in honor of Pompey!  (Source: AKC.com. )

Other pugs are just super friendly and don’t see anyone/anything as a threat! So it really depends on the pug.

It can also depend on training. If you want your pug to be a guard dog, you can use training to teach them to bark when people come to your home.