Are Pugs Good With Other Animals?

As a general rule of thumb, pugs are good with other animals. They love attention from their people so they might get jealous if they see a lot of attention being given to another pet. They might whine or try to push themselves between a person and the pet who is getting more attention or something like that. Generally, though, they will either become buddies or at least be very tolerable of other pets in the house.

Are Pugs Good With Cats?

Whether pugs will befriend cats will have a lot to do with whether or not they are socialized with cats while they are a  puppy. Pugs who are around cats from a young age will often befriend them. Pugs who don’t have experience with cats until they’re older may be less likely to cuddle up to a cat, but they aren’t likely to fight with them or try to hunt them, either.

Younger pugs can be high energy, so it’s important to keep ‘safe places’ for your cat that your pug can’t access. Your cat should be able to get away from your pug and take a break if they want.

Pugs are very food-focused, so your pug will likely try to eat your cat’s food. Be sure to feed your cat in a place where your pug can’t reach their food dish.

With my two pugs, one would sometimes whine/cry when it saw cats, but would just ignore the cats other than that. My other pug would sometimes chase cats if the cats ran, but when the pug caught up with the cat, it would just stop. The pug wouldn’t try to harm the cat or even play with it once the cat stopped…she just wanted to chase it down. Still, the cat didn’t like being chased so we tried to keep her from being able to chase the cat. That same pug loved to chase other dogs who would run, so it was definitely just a “let’s play!” type of behavior not aggression. 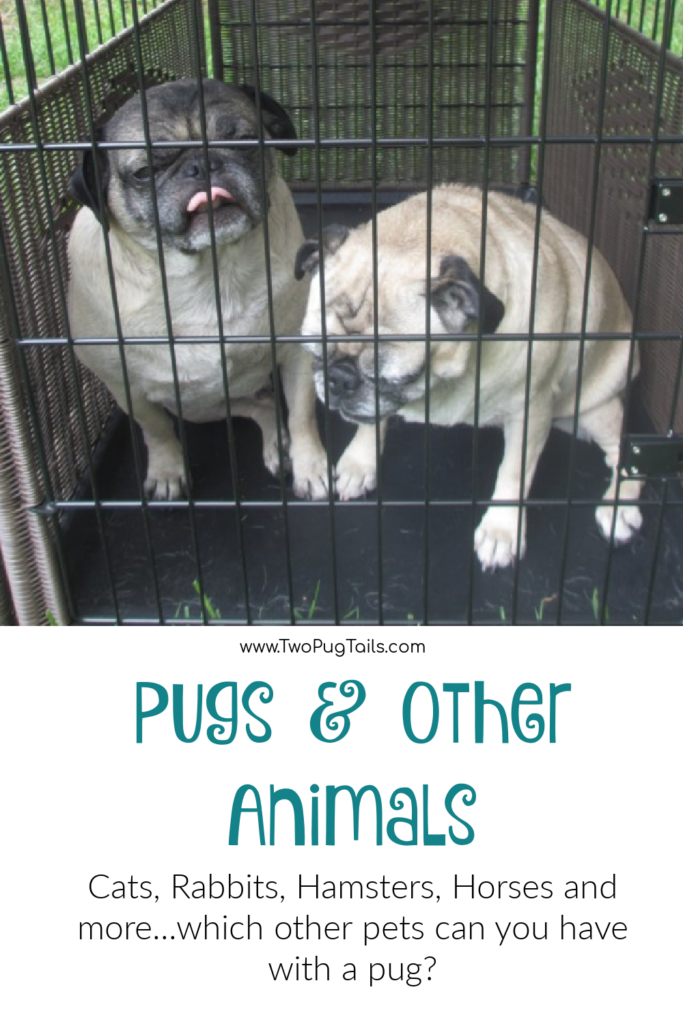 Are Pugs Good With Kittens?

Generally the dog breeds that you need to be wary of having around kittens are dogs that have a high prey drive. Pugs don’t have a high prey drive so they aren’t likely to try to ‘go after’ or hunt a kitten. If a pug is introduced to kittens or cats while they are still a puppy, they should do well. Pugs shouldn’t b left alone with small kittens because they do have a size difference and could injure a kitten, accidentally or otherwise.

Are Pugs Good With Other Pugs?

Yes, pugs usually do well with other pugs. In fact, it’s often joked that nobody has just one pug! Of course, this isn’t strictly true, some people do have just one pug. It is very common for people to have two or three pugs in the same household though and they usually get along well. My two were very bonded! 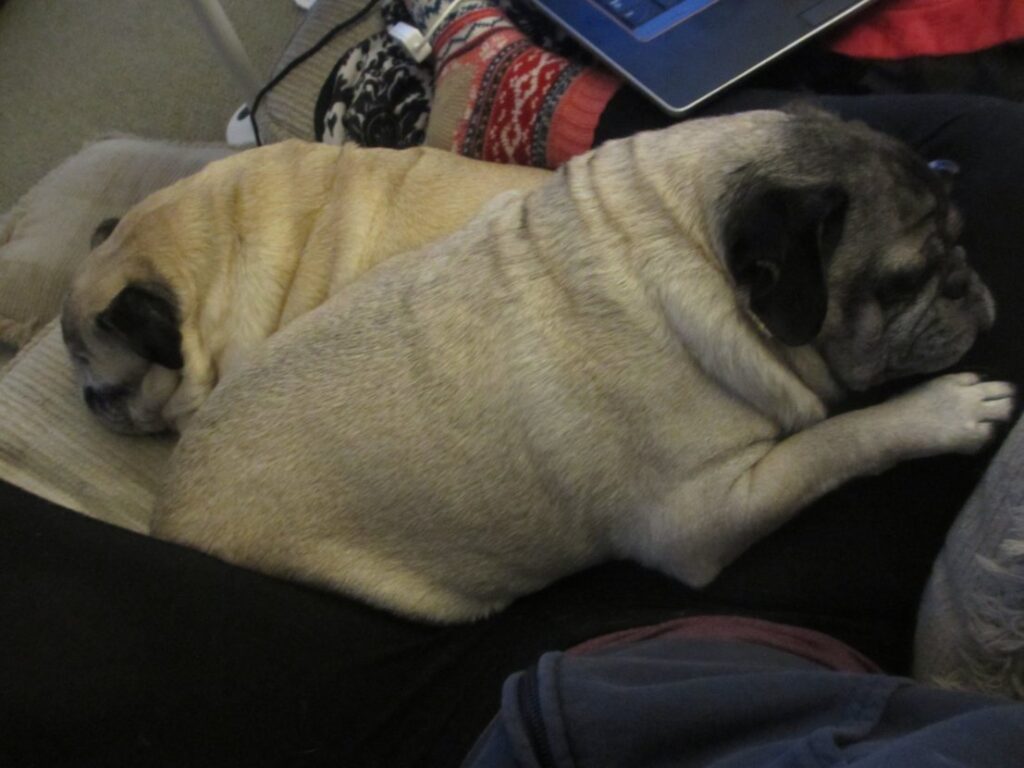 Are Pugs Good With Hamsters?

As a general rule, dogs should be kept separate from hamsters because dogs (even as small as pugs) can easily injur a hamster.

Are Pugs Good With Mice?

Most likely, a pug would just ignore a mouse. However, there are stories out there about pugs hunting mice so if you have a pet mouse it’s best to keep them separate.

Are Pugs Good With Hedgehogs?

I used to have a pet hedgehog! My pugs were curious about the hedgehog and would try to sniff it, but if the hedgehog put his quills up, they’d back far away. We only let the pugs around the hedgehog while supervised, but overall the dogs and the hedgehog didn’t care about each other.

Are Pugs Good With Birds?

Pugs aren’t likely to try to hunt down a bird, but they may chase them. To be safe, keep them separate.

Are Pugs Good With Other Dogs?

Pugs are generally good with other dogs. My two pugs never tried to ‘go after’ any other dogs. However, one of my dogs would whine/cry in the presence of some dogs. A couple times over the years we encountered dogs that would try to attack my pug in response to his whining. I think his crying made some other dogs see him as prey.

In other cases, the same dog would eagerly play with other dogs. Anyway, we were always cautious around other dogs just in case…but my pugs never had any aggression towards other dogs.

Are Pugs Good With Big Dogs?

Pugs are generally good with larger dogs. We had a high energy neighbor dog that was bigger than my pugs, and my little female pug would play pretty rough with the bigger dog, even!

Are Pugs Good With Chickens?

Like other birds, pugs may chase chickens but won’t usually try to harm them. Pugs don’t stand much taller than most chickens so they may be intimidated by chickens and choose to keep their distance. Your pug isn’t likely to harm your chickens but supervise any interactions to be safe.

Are Pugs Good With Rabbits?

Pugs have a calm temperament so they’ll usually do well with smaller or mid-sized critters like rabbits. If a rabbit is too fast, pugs may chase them but aren’t likely to want to hurt them. Still, it’s always best ot be really cautious and observe closely if you’re going to allow your pug around a rabbit.

Are Pugs Good With Horses?

Pugs may bark at large animals like horses, or be intimidated by them and prefer to keep their distance. They aren’t likely to befriend a horse or try to attack them, though.

Are Pugs Good With Sheep?

Pugs may bark at sheep, or they might ignore them, or they might be scared and try to keep their distance. A pug shouldn’t cause problems for a sheep though.

How to introduce a pug to another animal

2. If the other animal is a dog or an animal that is safe to be let outside, have your pug mee the animal outside. Some animals can be territorial of their homes, so if you can safely introduce animals in a neutral space that can be best. Keep the dog leashed while the introduction happens to ensure the safety of all animals.

3. Give the dog treats if they are behaving well while seeing the cat or other animal. The goal is to make it an extra-positive experience for your pug so they create a positive association with the other animal.

4. If either pet shows signs of stress or anxiety, pause the introduction and try again another day. It may require several mini introductions before the two animals can comfortably spend time around each other. It’s best not to go slowly and let both animals warm up to each other rather than forcing them to coexist.

5. Cats or other animals that sometimes like to hide should be given free access to spaces to hide from the dog if they wish.