If you’re considering getting any pet, knowing how active they are or what their energy level is, is really important! You want to make sure that your lifestyle will suit that of your dog.

While pug puppies have more energy than adult pugs, pugs have a pretty low activity level overall. Pugs love their humans and will follow you all over the house, but they aren’t fans of running or long walks, usually. A daily walk at a typical walking speed is a sufficient amount of activity for a pug.

This is part of why pugs make good apartment dogs!

Can pugs go on runs?

Pugs don’t have good exercise tolerance, so don’t expect a pug to be your running mate. That’s not to say that pugs don’t run and play, they do. They just aren’t up to be at your side while you train for your marathon.

Our pugs enjoyed walks, particularly in new places. They loved to sniff things and explore when on short to medium walks, as long as the weather wasn’t too hot or too cold. They wouldn’t be tolerant of a really long walk or a difficult hike, though.

It’s common for pug owners to share that their pugs try to refuse to walk even on short walks! Pugs aren’t always a big fan of exercising just to exercise. If that’s the case with your dog, making it a social event may help. Pugs are very social and affectionate creatures who typically love getting attention. One way that we encouraged exercise in our dogs was by playing games with them with toys that they could fetch. We would also run or even briskly walk away from them and they’d get excited to catch up with us.

They just liked being near us, so if we initiated exercise ourselves, our pugs would always decide to tag along, at least they would for quite a while. Eventually, they’d get so tired that they’d give up, but we knew that was when they had enough for the day.

Pugs also are intolerant of hot weather. If you live in an area that gets hot, you’ll want to plan your daily walk for early morning or later in the evening after it has cooled down. While taking your pug for a walk or playing with them, keep an eye on their breathing and make sure they’ve had recent access to fresh water to drink. Pugs can overheat easily in general, but even more so if they are being active.

When we lived in a house with excess space, we would sometimes get our dogs’ exercise in while indoors in the air conditioning! We two large rooms with a doorway in between. We could stand at one wall and throw a toy across both rooms (30 feet or so?), and our dogs would run to get the toy and break it back. We would do that over and over until they got too tired to keep playing.

If you live in a really hot area, finding ways to get exercise indoors can be possible with pugs thanks to their smaller size. 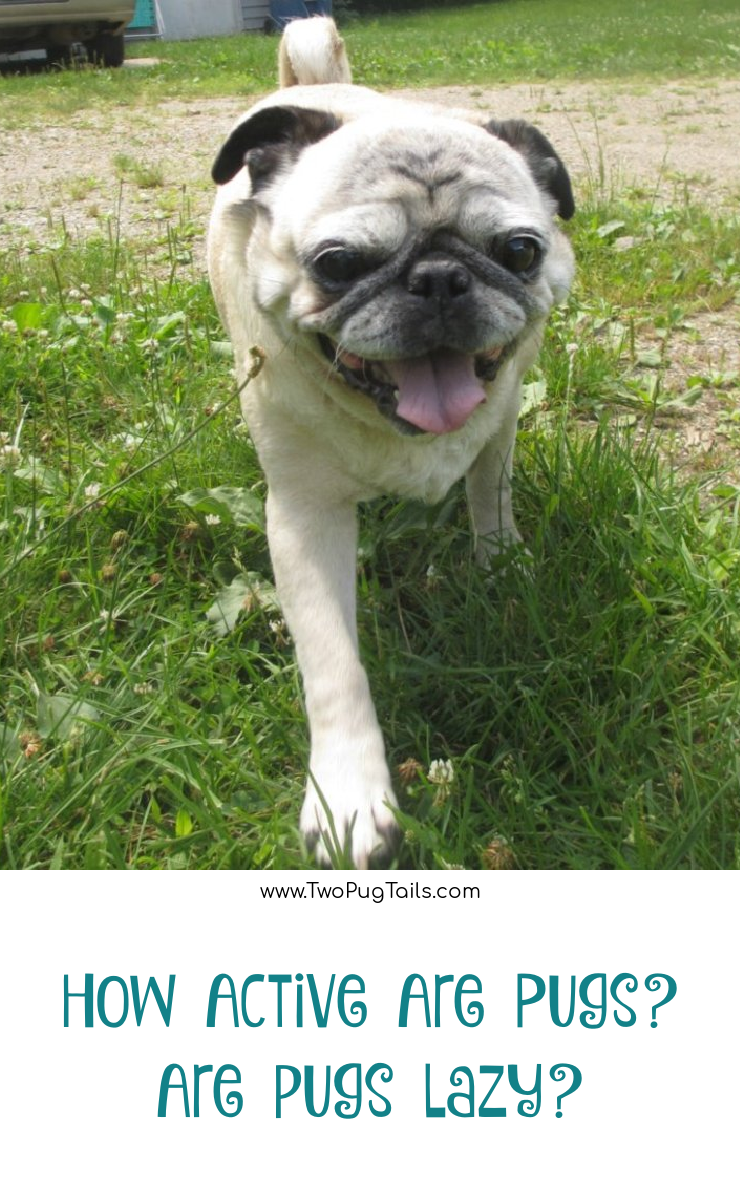 While pugs overall are rather low energy, pug puppies definitely have more energy than older pugs. Pug puppies may even seem hyperactive! We “dogsat” a pug puppy while we still had our senior pugs. We only had the puppy for a day, but it was trying to get our seniors to play almost the entire day long. We found ourselves pacing our driveway in an attempt to wear the puppy out a bit, so that it would leave the older pugs alone for a while.

Pug puppies can be excitable, if they get excited about something they may “go wild” with excess energy for a while. This could be in response to a visitor, getting to see anther dog, or even something as simple as taking a bath.

Most pugs start to settle down around 2 years old.

If your goal is to have a sleepy lapdog, I’d recommend getting a pug that is at least a couple years old. Pugs have a life expectancy of 12 to 15 years, so getting a slightly older pug will still leave you with many years of companionship.

While I would describe pugs as not being very active, I wouldn’t describe them as lazy. They live to be with their people, so if you are moving around, they’ll most likely get up and follow you the whole time. In other words, if you’re being lazy, they probably will be too. If you’re active, they’ll likely follow along at your side. My pugs wanted to stay right with me even when they were really old and had medical issues.

They were great couch potato buddies, for sure, that’s a slightly different thing than lazy, though.

How long of a walk can pugs go on?

Temperature is a major factor in how long a pug can walk. When it’s hot, they’ll pant heavier and shouldn’t walk as long. With the right weather conditions, a pug may be able to go on a walk that is over a hour long. Of course, how much tolerance a pug has for exercise will depend on the activity level that they’re used to, as well.

If you want to increase your pug’s endurance, starting slow and giving them time to build up is ideal. Just like people, they will build muscle and increase endurance with regular practice.

It’s important to keep an eye on how your pug seems to be feeling. Watch how they are breathing, so that you know to call it quits if their breathing gets too labored.