When reading this post, please keep in mind that by ‘common’ I don’t mean to suggest that a majority of pugs will have these conditions. Instead, this is a list of conditions that it’s not unusual to hear someone say their pug has. Some of these are more common than others.

Pugs are often seen as a breed that is unhealthy or has a lot of health problems. Pugs live an average of 12 to 15 years, so they have a pretty good life span for a dog. They do have various medical conditions that they experience more commonly than other dog breeds. I think it would be easy to look at this post and decide that pugs are super unhealthy. So for context, here are the results of a study on the health conditions in pugs, in England. A little more than a thousand pugs were included in this study. 68.19% of the pugs studied had at least one health condition. Here are the most common health conditions in pugs were:

And the most common categories of pug disorders were

I hope this puts into perspective that while all of the conditions below are at least somewhat common in pugs, none of these impact a majority of the breed, or even 1/5th of the breed, as the most common health condition impacts jut 13% of the pug population.

Anyway – let’s get into what some common pug health problems are. 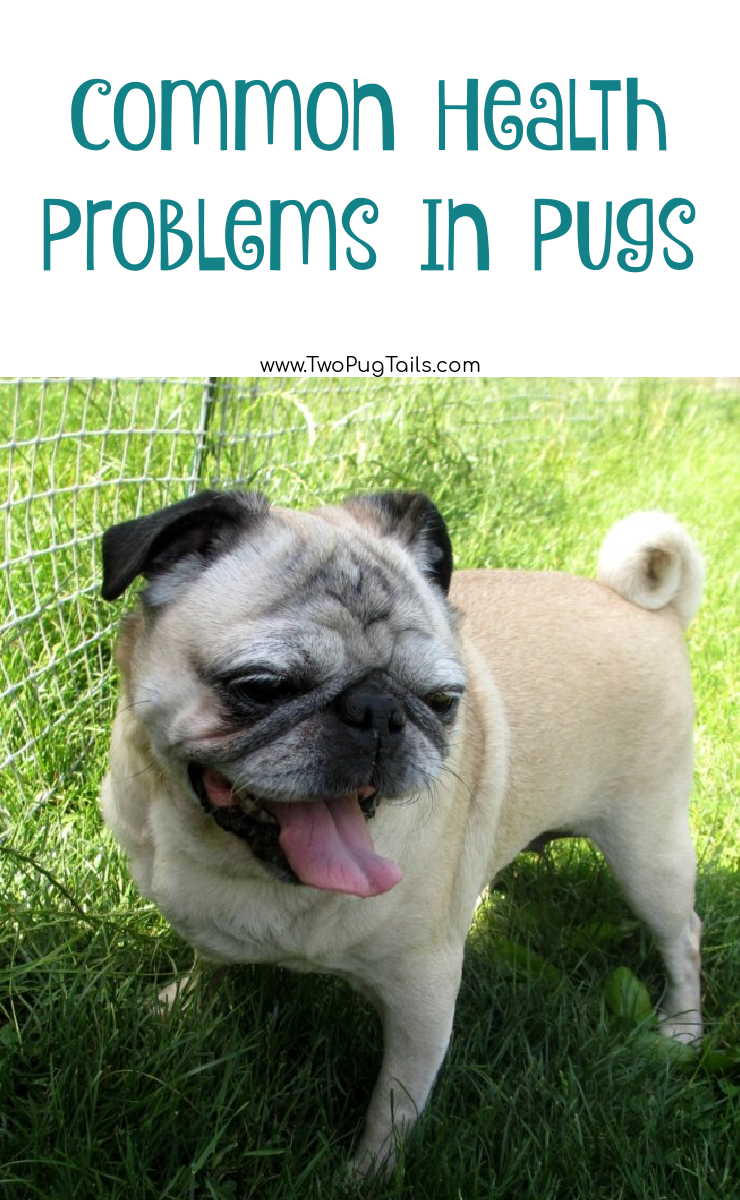 It’s common for pugs to struggle with breathing well in hot or humid weather, during physical activity, or when excited. Snoring is also common in pugs.

Pugs are a brachycephalic or flat-face breed which results in many of them struggling to breathe well through their noses. Some have stenotic nares which means their nose is pinched closed. Some pug owners treat this condition with a surgery that widens the nose.

Elongated palate is another factor.  Many pugs have elongated soft palate’s which can disrupt breathing as well. Surgery can be done to correct this if the owner chooses.

Reverse sneezing. This can sound rather startling if you’ve never heard it before. I don’t think it sounds like the opposite of a sneeze so I’ve never really understood the name. It almost sounds like the dog is trying to clear their throat, and the “attack” can go on for some time. It is caused by a muscle spasm if their soft palate gets irritated. Due to elongated palates, pugs are prone to reverse sneezing.

Collapsing trachea. This is common in various toy breeds, including pugs and can contribute to breathing problems. Using a harness rather than a collar can help reduce the risk of this. 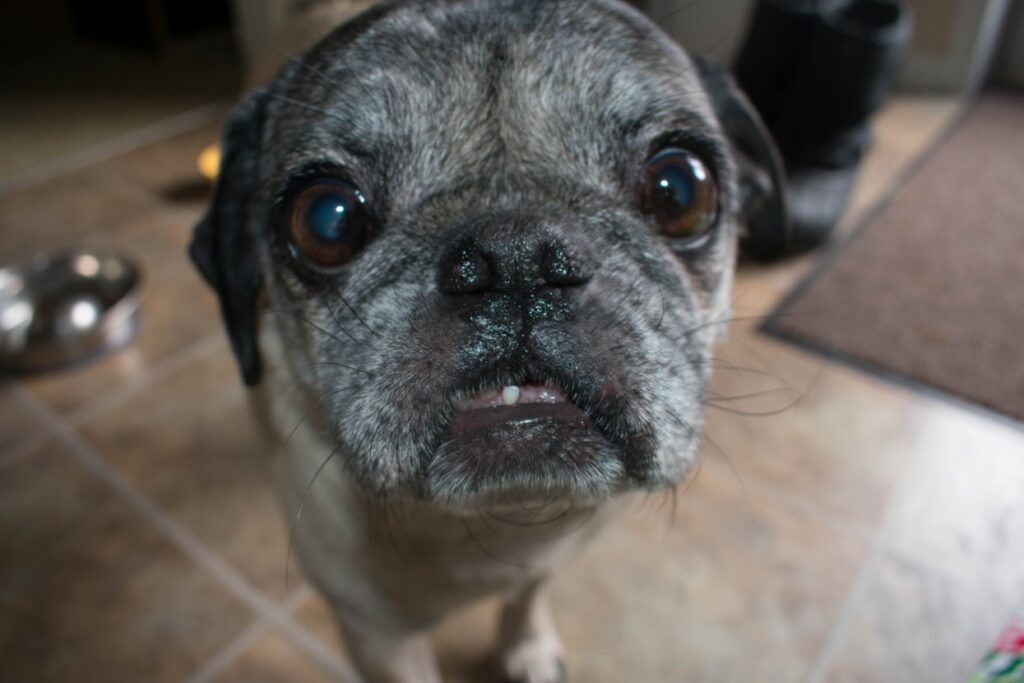 Degenerative myelopathy and hip dysplasia are both fairly common in pugs. Some pugs experience mobility trouble as puppies as a result of inherited condition that are more severe. What I hear more about though is myelopathy starting in the senior years. It is essentially a rear-end weakness that starts in the back legs but works its way up the spine.

Pugs have more wrinkles than most dogs, and those wrinkles can basically form little pockets that can gather dirt, dust, dander, sweat, food, you name it. If not kept clean, this can lead to irritation or even infection. One of the more common areas for this problem is in the nose fold or nose wrinkle. I have an article on what to do if your pug gets sore above their nose. I have another post on why your pug stinks which is often related to skin trouble.

Because of their odd-shaped skulls and small mouths, pugs often have crowded teeth with some crooked teeth. This can lead to dental problems as a result of some sections of their teeth not being accessible. Dogs clear plaque when they eat, so if portions of their crowded teeth don’t get scratched when they eat food, those areas are likely to build up plaque and eventually decay. 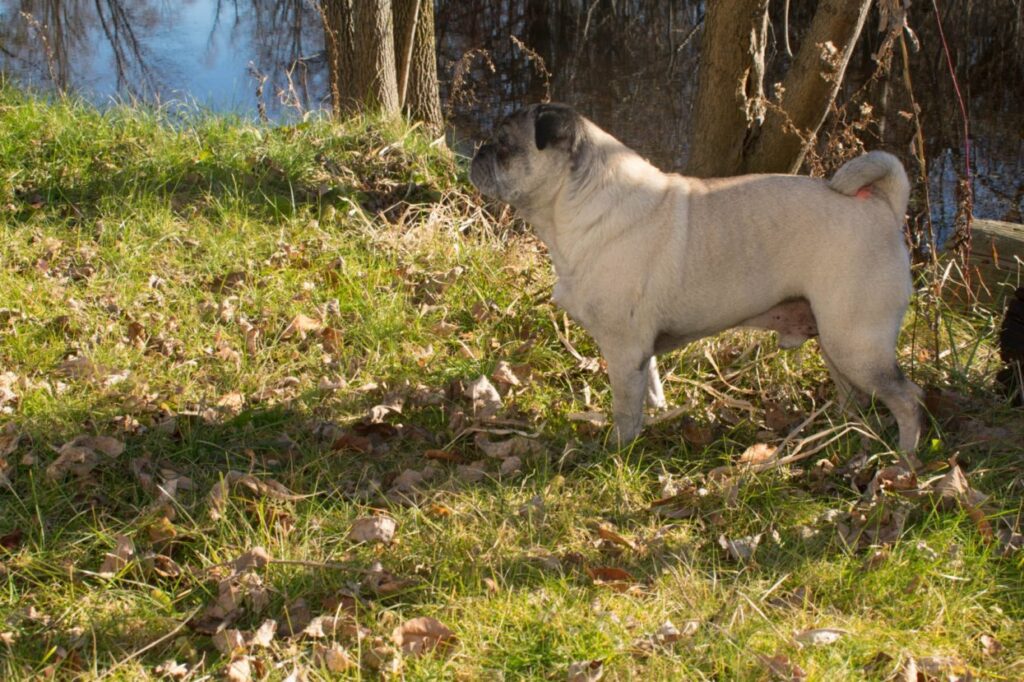 Or more specifically, separation anxiety. Pugs are pretty clingy (see: why does my pug always want attention?) and many don’t do so well if left alone. Mine didn’t even like it if we left them in the house while doing work in the yard! While we may not typically think of it as a health problem, it’s certainly a common problem for pugs.

Related blog of mine: Can pugs be left home alone all day?

This is a neurological condition that is only seen in pugs, and has an unknown cause. Sadly, it is terminal.

Pugs love food, and if not monitored, they will usually overeat and become obese. Thankfully, this is pretty easily controlled as long as the pet owner isn’t too generous with how they feed their pug. Related post: Why is my pug always hungry?

Pugs sometimes experience entropion, which is where part of their eyelid is folded inward which can irritate the eye or even scratch and damage the eye.

Pugs are often prone to keratoconjunctivitis sicca or dry-eye. This results from their eyes protruding farther out of their skull than most other dog breeds. Many pugs sleep with their eyes open and/or don’t fully close their eyes when they blink, so their eyes don’t stay well hydrated.

Cherry eye. This term comes from the irritating part of the eye sort of looking like a cherry. It’s when the inner corner of a dog’s eye turns red in response to an irritated or inflamed tear duct. Pug’s eyes bulging out a bit, and the possibility for their eyelid to fold inward a bit, increases the odds of them developing cherry eye.

Cornea ulcers. Again, due to the pug’s eyes sticking out farther, they can be at greater risk of being scratched or damaged. The cornea is a transparent membrane that covers the outside of the dog’s eye. If scratched, it can become infected and develop an ulcer. 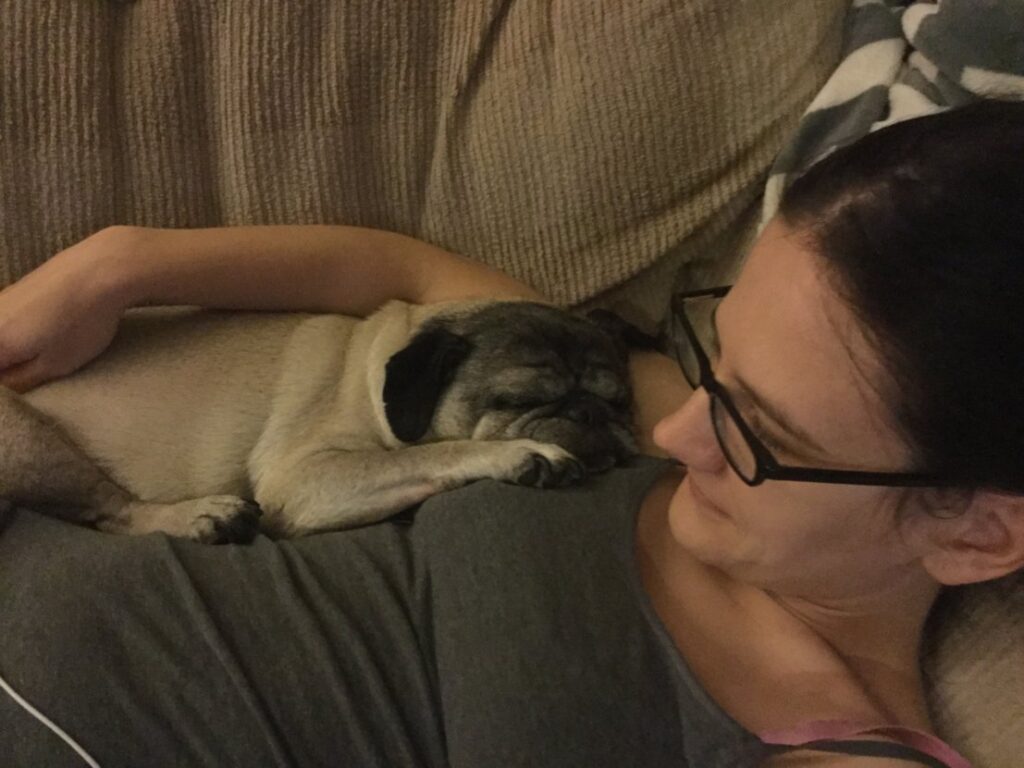 Some pugs experience allergies. It can be to food ingredients, things in their environment (plants, grass, dust, etc) or topical irritants such as shampoos or flea bites. 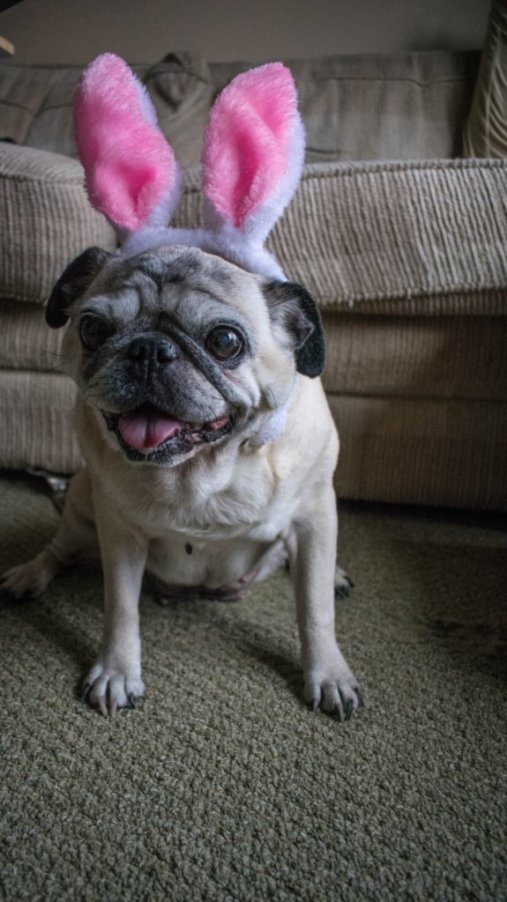 Both of our pugs were obese when we got them at age 8 and 9. We reduced their weights pretty significantly (6 or 7 pounds each) and they each had a visible waist when viewed from above.  But they were probably still slightly overweight with us, I think their body condition scores were probably 6 to 7 at different times, and 7 is overweight.

My pug Beans had epilepsy. She had seizures about once a year or every other year until the last year of her life when they become more frequent. She had trouble breathing in hot temperatures, and was diagnosed with a collapsing trachea around 12 years of age. She had a very short nose which I believe was a significant factor in her breathing trouble. We had her from age 9 on, and we only ever used a harness on her, though her previous owner used a collar. I’m not sure if the collar use contributed to her collapsing trachea or if she would have developed that regardless. She got cataracts in her senior years and was nearly blind near the end. About six months before she passed away she was diagnosed with fluid in her chest and was put on furosimide. She had a handful of urinary tract infections in the time that we had her, and was mostly urinary incontinent from about age 15 on. She also became a deaf pug as she got older.

My pug Frank was allergic to flea bites and it was pretty severe. If he got even a single flea bite, we’d usually end up having to get him a steroid shot to get his skin calm again. Otherwise, he was very healthy until about age 14 when the early signs of degenerative myelopathy began. He had a slightly longer and more open nose for a pug and I think this helped him to avoid some of the issues that Beans had.