What you consider annoying can be really subjective. Some people find pugs annoying, while others won’t find them annoying at all.

If you’re considering a dog, it can be helpful to think about what traits you do and don’t like in dogs, and then look at common traits of different breeds. If you think you might find pugs annoying, I’ll go over some of the traits that some people may friend annoying about pugs. 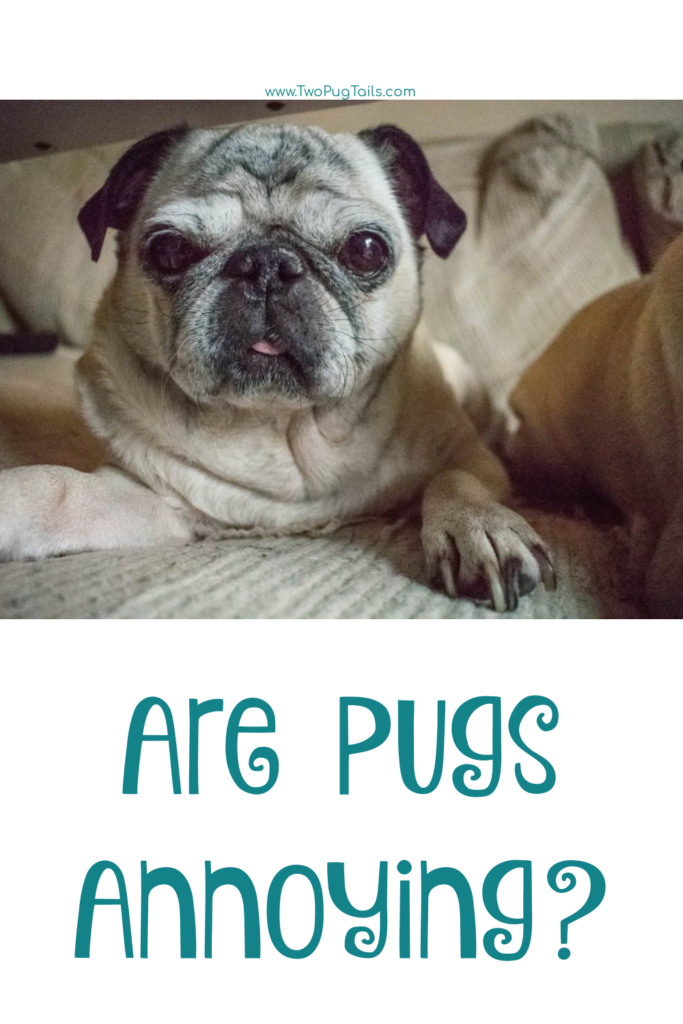 They breath heavily. Getting a pug from a breeder who breeds to extend the nose can reduce this, but many pugs have a difficult time breathing unless they have surgery to expand their nasal passages. I remember a scene in a movie where a pug was breathing really loudly while people are trying to talk. Someone asked if the dog always breathes that way and they said yes. That’s always stuck with me so I do like to tell people that breathing loudly 24/7 is not normal for pugs.

It is common for them to breathe heavily after exercise, or while excited or nervous. My pugs would get excited by simple things like when I stood out of bed for the day and when I headed to bed at night. They’d pant for a few minutes afterward, every single day. They’d also get excited or nervous (or both) when new people would visit so I’m sure guests might think our dogs breathed worse than they really did, as they only saw them while they were amped up. Same thing with our vet! My dogs breathed so loudly while at the vet. Anyway, while it’s not constant, they do breathe harder than other dog breeds which can be annoying to some people. 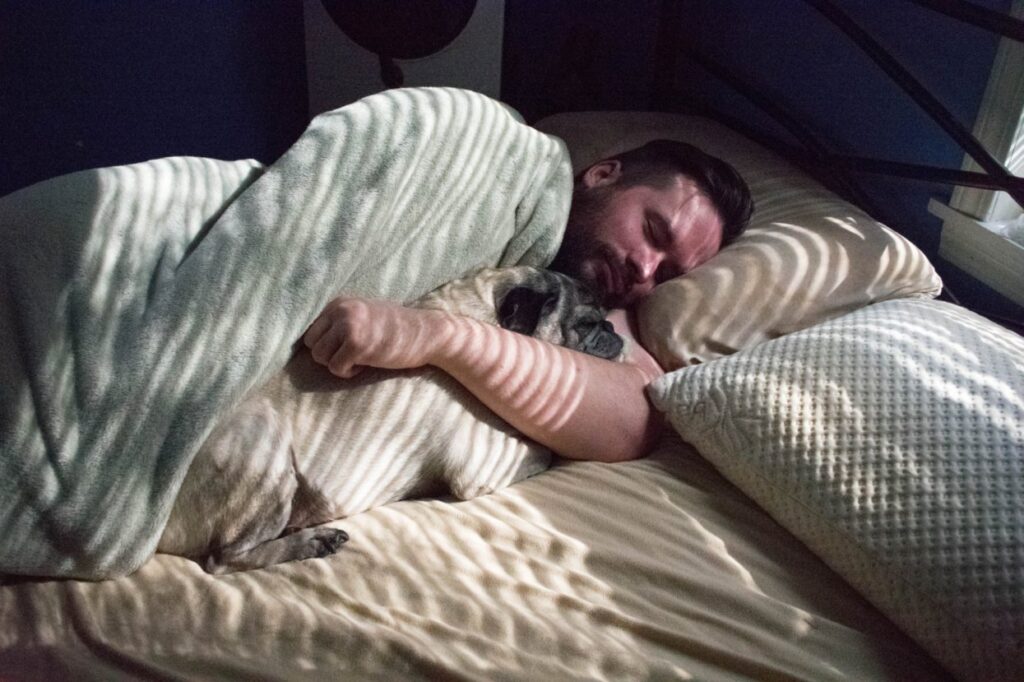 They snore. How much varies from one pug to the other. This isnt’ always a direct correlation to how well hey breathe while awake, oddly enough. I had one pug who breathed heavily when excited or nervous, and she never snored. My other pug would only breathe heavily if he got really overheated, but he snored more frequently. In general though, pugs are more likely to snore than some other dog breeds.

They are stubborn. Pugs can be a little challenging to train, but it’s not that they are stupid – they’re just stubborn. They can be a bit willful. At the same time, they really love their person so they do really like to make you happy. They’re also food driven dogs which can make training with treats really effective. Anyhow, if you want a dog that is highly obedient, you may find pugs annoying.

They are food obsessed. They may beg for food anytime they see a person eating unless you don’t train them not to. They may also whine/cry like they’re starving between their meals. They’re likely to get way too excited for their meals, too. 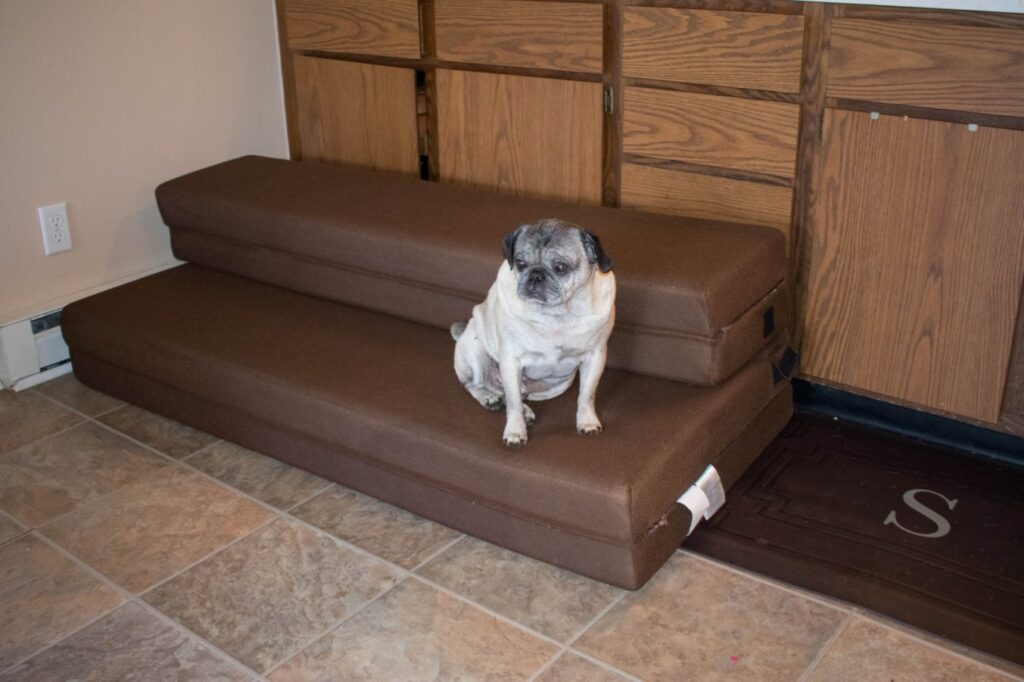 They may scream. Yes, some pugs can bark in a way that sounds like screaming. Only one of my pugs did this, and he only did it while getting his nails trimmed. While rare, it was very loud.

They’re messy with water. I can’t even imagine what it’s like to own a bull dog or other dog with really big jowls, because my pugs didn’t have big jowls but they could get water all over the place! They weren’t trying to make a mess or anything, but just drinking out of the water dish and then walking away would leave a rail of water all over the kitchen.

They want your attention all the time. I have a whole blog post on how pugs want your attention all the time. They were bred to be lap dogs, so they really exist just to keep you company. With that in mind, it isn’t surprising that they don’t really know what to do with themselves if they don’t get a lot of human interaction on a regular basis. Most pug owners find this endearing, but it’s understandable to me that not everyone wants that type of a pet. If you want a dog that is more independent, a pug will probably annoy you.

They want to be close to you. Similar to watching your attention but more specifically they want to be able to physically touch you. They’d love to be in your lap 24/7, and if they can’t sit with you they want to still be as close to you as possible. Mine would often literally sit on my feet while I was cooking or washing dishes.

Separation anxiety. Again, pugs were bred to be companions. They exist to be with you, so if left alone they often will suffer from separation anxiety. This can be frustrating for some people, especially if they act out while anxious. It’s common for dogs to “misbehave” while anxious. They might chew on things they shouldn’t or get in the garbage, among other things.

They may need to go to the vet often. If you’re looking for a dog with minimal medical needs, a pug isn’t a good breed to go with. It’s not that pugs are constantly at the vet their whole lives…but they do have more medical issues than some other breeds, especially as they age. My pugs got through many years with only one wellness visit, but once they hit age 14 or so, both were at the vet at least every 3 months or so.

They may need expensive food. Not all, but some pugs will have allergies or sensitivities. Some pugs will have skin or digestive issues unless they’re on a really high-quality diet which can be expensive. If you’re looking for a dog that can get by on cheap food, a pug may not be able to and you may find that annoying.